Click link to read the article on Louis Raemaekers in 1914-1918 Online: International Encyclopedia of the First World War.

Raemaekers visits the western front at the Somme

In July 1916 Louis Raemaekers visits the western front for the first time, invited by the British government. Many more visits follow in the next few years.
Click here to read the story of his first visit in Louis Raemaekers, armed with pen and pencil. 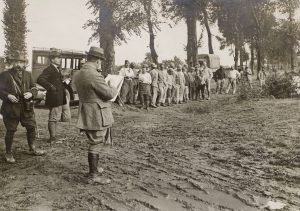 Raemaekers, while make a sketch at the front near the Somme

World War I was fought not only by soldiers. The political cartoons of Louis Raemaekers and other artists of the time brought home the realities of war and are said to have influenced the Allies’ war efforts.

The popularity of caricatures and cartoons surged during World War I, in magazines, posters and postcards. Unlike photographs of the time, cartoons were vividly colorful, and top comic artists were much-sought-after. Most people didn’t own cameras, though soldiers on the Western Front often paid to be photographed, simply to show their families they were still alive. And for many confronted with the effects or aftermath of the war’s violence, photos were too graphic for daily consumption.

Caricatures and cartoons served as a release valve—allowing citizens to make fun of politicians, or the enemy, to offset the dire realities of the day. “The period was a high point for illustrated magazines, and cartoons were contemporary commentaries,” says Anita O’Brien, director and head curator of London’s Cartoon Museum. “After initial optimism about the war faded, when it became clear that no one would be home by Christmas, when the suffering became apparent, cartoons were needed to help people get through the experience,” says Ms. O’Brien.

They were also used as propaganda, a valuable military tool. Cartoons in trench newspapers rendered the enemy as small or ridiculous, defusing fear and allowing soldiers to feel more powerful than they actually were, says Christoph Cornelissen, a professor of contemporary history at the University of Frankfurt.
Magazines and newspapers also used cartoons to show the enemy as monsters, frequently employing motifs of animals, Satan or death, as in cartoons by Dutch artist Louis Raemaekers. During a visit to the U.S. in 1917, Raemakers signed a contract with the Hearst newspapers, and by later that year his drawings were being published on a regular basis in more than 2,000 papers on both sides of the Atlantic.

“From a U.S. point of view, Louis Raemaekers was instrumental in bringing the U.S. into the war, featuring the horrors, massacres and excesses, the suffering of small nations, which became associated with the German army,” Ms. O’Brien says. Cartoons also provided public information, advising people to wear gas masks during air raids, or to ration food, she notes.

In Germany, the culture of political satire was stoked by weekly magazine Simplicissimus, founded in April 1896. Prior to the war, both Kaiser Wilhelm and the clergy had expressed strong objections to the magazine, which only increased its popularity. The magazine ceased publication in 1944, because of a wartime paper shortage, and was published again from 1954-1967.

Today’s comics have grown from a wellspring of cartoons and caricatures during World War I, says Anette Gehrig, director and curator of the Cartoonmuseum Basel in Switzerland. “Doonesbury is a good example of a cartoon strip which links international events and political satire in a modern way, but there are many others,” she adds.

The cartoons of Louis Raemaekers constitute the most powerful of the honourable contributions made by neutrals to the cause of civilisation in the World War.