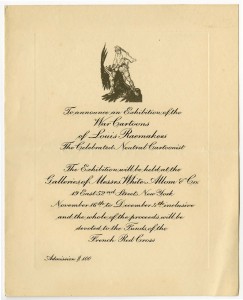 ‘In November 1916 an exhibition was comprised in New York  of Louis Raemaekers’ cartoons in aid of the French Red Cross. It was organized by J. Murray Allison, an Englishman, and held at the galleries of White, Allom & Co., New York. Raemakers’ cartoons appeared regularly in De Telegraaf, one of the leading Dutch newspapers, and whose caricatures of the German Kaiser and army were considered one of the most dangerous weapons against the Germans during WWI. He was considered such a threat that Germany put a price on his head so large he was forced to flee. The Westminster Gazette described him as a “genius” and “our friend and most powerful ally”, stating that “long after the leading and ‘leaded’ articles in the papers have been forgotten…the cartoons of Mr Raemakers will live to feed the fiery indignation of succeeding generations […] Louis Raemakers has nailed the Kaiser to a cross of immortal infamy.”’